Prior to #TMC17, there was an interesting discussion on Twitter about the future of blogging as it relates to the #MTBoS.  Then, during TMC, there was quite the debate on the #MTBoS hashtag.  As part of that debate, several people mentioned that they weren't quite sure where they fit into the MTBoS because aren't bloggers.

The timing of these two discussions was interesting to me.  Blogging is a struggle for me.  I will have 20 ideas floating in my head, I'll even write them down, but when I click "New Post", all of those thoughts just disappear.  Or worse, I'll type up a post and quickly delete it because it just sounds lame in my head.

At TMC17, one of the keynote speakers, Carl Oliver challenged the attendees to just #pushsend.

It's after my bedtime, so maybe this post won't make sense, but all of these things - the podcast, the keynote, the Twitter discussion / debate - all of them have twisted into my head and I just had to write it down....

Because I do think that blogging has a fundamental role in the MTBoS and its future growth.

From a historical standpoint, blogging is ultimately how I figured out that I wasn't crazy.  There were other teachers out there that were passionate about teaching and learning and math and how to best teach math.  I wasn't crazy for spending all of my time thinking of activities and reading educational books and literally having teaching as a profession AND as a hobby.  I read Dan and Kate and Jackie and others well before I started on Twitter.  Then, through Twitter, I could have real time conversations to hash out the ideas they presented in their posts.  That rocked my world.

But from a current place, the medium of Twitter is too fluid.  I love Twitter, don't get me wrong (and I think 50K+ tweets would agree with me.  But, Twitter is limited by 140 characters.  Often a great idea will get tweeted and this amazingly rich conversation will follow.  I will often favorite the tweets, might even email some of them to myself, but most often, I follow up to ask if the author has blogged about it in more detail.  Why?  Because Twitter is like drinking from a fire hose.  In the space of hours (or even minutes), great ideas are gone, washed down the river by other ideas.  You reach out, you try to grasp it, and sometimes you can.  But not always.  Blog posts however, are longer, more detailed, more permanent in the vast space we call the MTBoS.  Blog posts serve as a record of where you are, where you've been, and where you're going.  You can reflect on your professional growth, you can remind yourself of that great idea you had 5 years ago, it's your own personal yearbook of your journey.

So why do I blog?  I blog for me mostly.  Or at least I like to think I do.  But I blog for you too.  Because to be honest, we all like to know that we aren't just yelling into the black void.  But it's mostly for me.  Mostly to remind myself of where I've been, what ideas I've had, what worked well and what didn't.  Maybe an idea helps you out too, maybe it sparks an idea, maybe it doesn't.  But that's okay.

Whatever your story, please, just #pushsend
Posted by druin at 9:41 PM 2 comments:

Anxiety Sets In... and a #Made4Math

For me, the month of July seems to zoom by and before I know it, the back-to-school nerves start setting in.  This weekend was a time of school supply shopping, blog reading, pinterest searching, and saving tons of ideas for next year.

I officially report 4 weeks from today, although my building is the only one on campus that isn't under construction, so that's a bit nerve-wracking for my colleagues in other buildings!  At least I can go up and work in my room if I choose to.

Today was a day of little projects and organization.  I didn't get anything officially finished, but here's what I worked on: 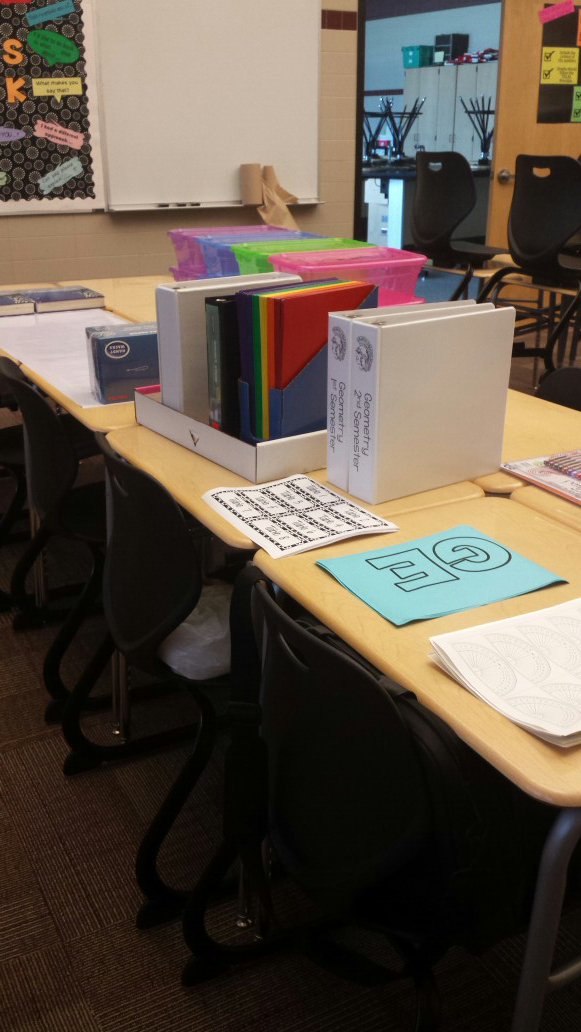 In no particular order...

Still to do from these projects...

There are so many things left to do that I haven't started on!  I am a fairly organized person by nature, but with 160+ students, I have to figure out some new strategies for keeping up with the paper trail, staying on top of INB handouts, etc.

Part of today was just sitting in my classroom, staring at the wall and trying to wrap my head around all that needed to get done in the next four weeks.  (OMG - ***4*** weeks!!!  EEKKKK).  I don't know about you, but I love to-do lists, so when I'm overwhelmed, I often have a tendency to create a new cute to-do list to help me stay organized. :)  (I know.. what a great use of my time today, right???)  I forgot to take a photo of it, but I printed it on bright yellow paper, laminated it, and dug into my stash of fine tip dry erase markers to help me make a list. :) 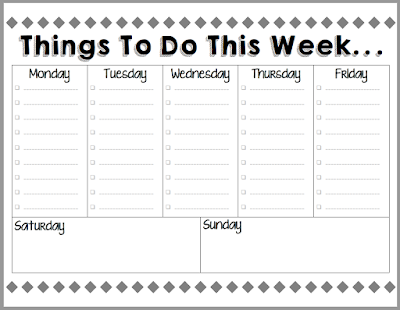 It's nothing fancy, but if you want a copy, feel free to download it here :)

Email ThisBlogThis!Share to TwitterShare to FacebookShare to Pinterest
Labels: #made4math, back to school, classroom

Formative Assessment from a Student Perspective

Yesterday, I posted the first part of a book review on Transformative Assessment by Popham.  As I said then, I'm only halfway through the book, but Chapter 4 really deserved its own post.

So far, I've only read about Level 1 and Level 2 assessments.  Level 1 assessment is what we are probably most familiar with - how formative assessment techniques can help teachers change or alter their instructional methodologies in order to improve student learning.  Level 2, though, is pretty powerful as well.  In fact, I originally planned to post about Level 2 assessment on yesterday's post, but then decided it was so powerful that it deserved a post all of its own. :)

Throughout this book, I keep thinking, "Wow! I've never thought of it like that!" and the quote above is just another example.  If my goal is to enhance student learning then obviously I'm going to do what I can do from a teacher / instruction standpoint, but I also need to make sure that I am doing all I can do to empower my students to take control of their learning.  To do this, Popham argues that students need to be taught how to use formative assessment data to make their own personal instructional adjustments in their learning tactics in order to maximize the effectiveness of those tactics.

Again, a few quotes from Chapter 4 of the book followed by my own thoughts:

This has been a very people-y week, so today was a quiet day at home with a book. :)

(Am I the only one that totally becomes a hermit in the summer months?  I really value my quiet time!)

Anyway, so earlier, I tweeted out this photo: 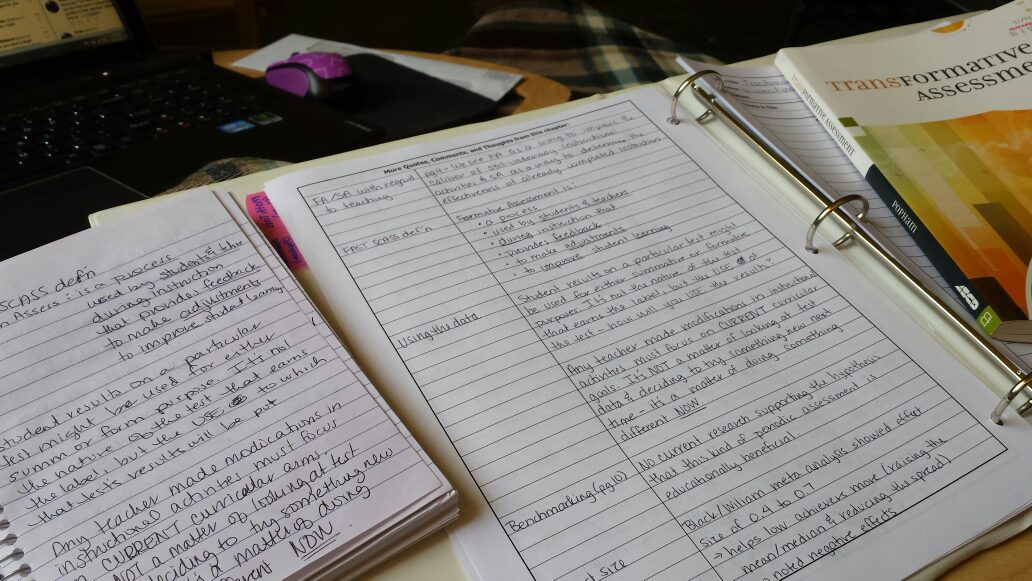 Around the time I was finishing up Math Tools, @pamjwilson texted me a picture of a book she had found in her stash called Transformative Assessment by Popham.  I happened to have it in my stack as well, so it became my next #EduRead of the summer.  When I'm actually reading, I take very messy notes in a small notebook, which this summer is being transcribed into a more permanent (and neater) notebook using the forms I shared a few weeks ago.

I'm about halfway done with this book and while it's not been an easy read, there have been some really valid points made that I wanted to share.  Below are some quotes and thoughts that I have had while reading this book:

I'd love to hear your thoughts on Formative Assessment!

On Twitter, there have been several discussions about Teacher Planners and how each of us organize our lives. I really liked last year's planner, which pretty much looked like this: 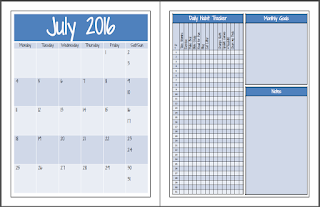 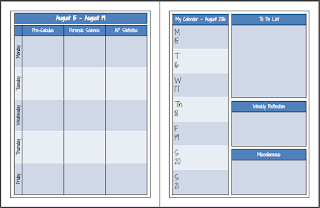 I did not make many major changes this year, so I decided to upload a generic / blank copy in PDF for anyone that wants a copy.

If you have suggestions for changes, I'd love to hear from you!   :)

Also, if you find any typos, please let me know.  I've double checked all of the dates, but typos do happen! :)
Posted by druin at 12:57 PM No comments: